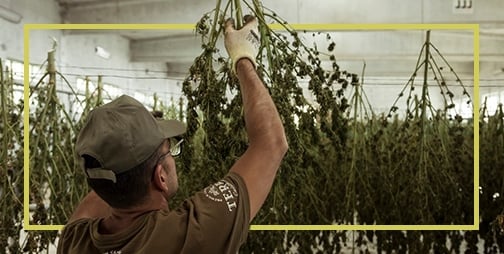 Growing hemp in order to make hemp oil products, such as Synchronicity’ tinctures and salves, is no small feat. The process takes several months and requires paying meticulous attention to every element step in the process, from temperature to humidity, plant nutrition, and watering — all along the path from planting seeds to manufacturing products to shipping and distribution.

At Synchronicity, a 10,000-square-foot indoor clone room can hold up to 60,000 plants at a time, says Adam Titelbaum, senior plant manager. That’s the “nursery for the babies,” he describes.

The clones that start off in the nursery are taken from mother plants — all hemp that goes into consumer products must be taken from a female plant. “We take as many cuts off the mother plant as possible,” Titelbaum says, which could mean that up to 250 clones come from a single plant. “We’ll go up to [the mothers] and you have all these branches, shoots, or nodes, as they’re called, and we’ll take a sterile razor and slice off a small branch,” he explains. The selection from the mother plant may have about five nodes on it, “meaning there are five different places where buds can grow out of it.” That selection is then put into water at a very specific pH level of 5.5, and then is placed with little coco peat moss plugs that have been soaked in nutrients in a tray with a little dome. Each tray can hold 55 clones in it. “With a dome over it, it creates its own little greenhouse [where] we can monitor the humidity,” Titelbaum says. “Then you have to air them out every day. We’ve got hundreds of these trays.”

After about 10 to 14 days in the clone room, once the seedlings have rooted, they’re moved to a greenhouse. That’s where they stay before heading to the open fields — a 64-acre farm in Pueblo, Colorado. “We have them acclimate to the sun by [first] having them spend some time in the greenhouse,” Titelbaum explains.

The whole process takes about six months. “We start cloning in March [and] we harvest them sometime in September,” “That’s based on how plants are maturing and testing in the field.” That’s soil testing — to gauge the nutrient levels and be sure there are no toxins in the ground. To help build the soil, the farmers also plant some cover crops in the field.

They’ve also started to employ drone technology out in the field, meaning that drones fly around to help detect nutrient deficiencies or breaks in the water lines. “Drones are going to be our key for checking on the field,” Titelbaum says. “[Since] the most dangerous or biggest setback to any plants, garden, or farm tends to be human beings.” Humans unwittingly carry around bugs or pathogens that can compromise the health of the hemp plants, so the less human interaction with the plants, the better. “Having a drone fly over lessens the chance of breaking, damaging, or infecting the plants,” he says.

Located in the Mesa Junction of Pueblo County, the farm is bordered by the Arkansas and Saint Charles Rivers. “We have water rights, which in Colorado is huge,” says Titelbaum. “We’re able to water our farm by pumping out of the river.” The farmers also use a good deal of microbes and beneficial bacteria at all stages of the growing process.

And once the hemp is harvested, it gets lab-tested, and goes onto processing, before it’s available for sale as a tincture or topical.